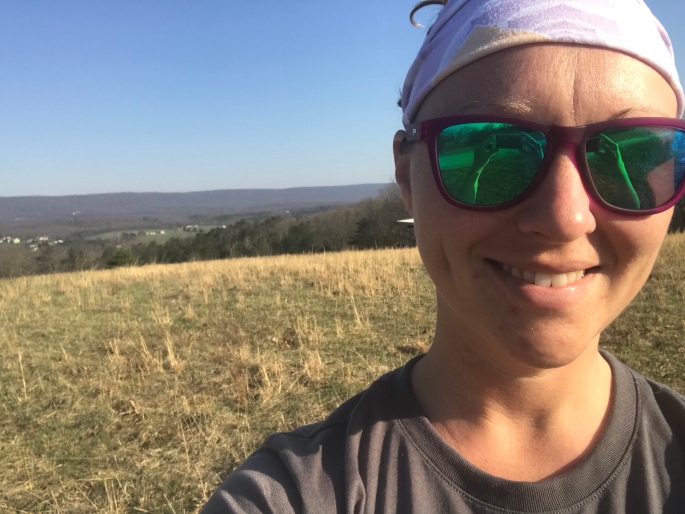 I’d heard of this race, which is a fundraiser for the Potomac Valley Audubon Society, ever since I started running several years ago, but we’ve always had other plans on the date. I love the idea of contributing to PVAS in any way – it’s an awesome organization with great nature programs and summer camps for kids that all three of my boys have taken advantage of. I was happy that this year I managed to not be booked and could tackle the 10K as a training run for the upcoming Harpers Ferry Half. I heard the course, which was new this year, was hilly, and I need all the practice I can get for the notorious hills on the Harpers Ferry course!

The setting for the race was Broomgrass, which I believe is some type of farmland community/preserve. Aside from a few houses very spaced out, the course was definitely undeveloped and scenic. The drive was nice, and it was one of the first truly hot days of spring.

The course consisted of a 5K loop that went on the gravel roads of the community, on a single-track dirt path through the woods and on a mowed field. All good practice off-pavement!

The start was pretty level with one minor hill before we dipped into the woods, where it was gorgeous running but impossible to pass. This wasn’t as much an issue on the second lap but during the first I felt a little held back. Much of the rest of the course was manageable excepting two major hills that were so steep I didn’t see anyone else running them, and truth be told it was all I could do to even walk them. Between the heat and the hills I had a much slower time than I wanted but it sets realistic expectations for the half, so that’s good.

From the moment I arrived until I left, this was an extremely organized race – parking went smoothly, and it was easy to get in and out, the course was extremely well marked, and there were plenty of cheering volunteers. Tons of post-race snacks and cold water, too!

It was my first race using the Ultimate Direction Scott Jurek running belt, too. I loved having water with me, and I even more loved having my bib pinned to it instead of my shirt! One problem was that it kept twisting sideways on me which made the pockets rub my arms, so I kept having to straighten it – not a huge issue and might be solved by tightening it more.

This was a pretty small race but super well run, challenging and local and for a good cause, so I’m glad I got to be there. 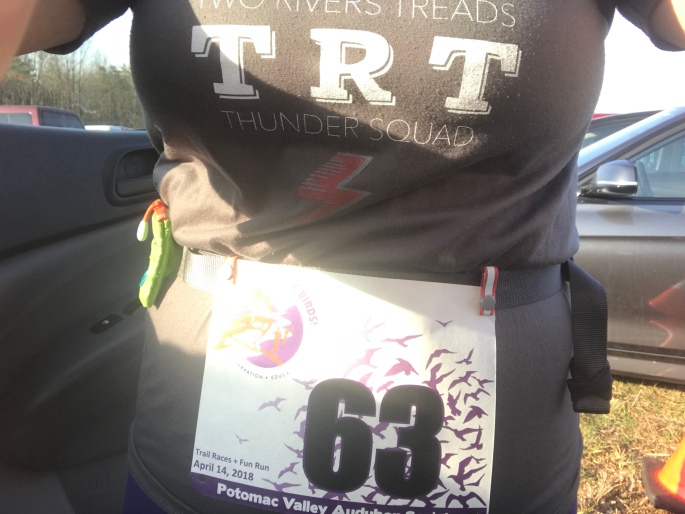 I felt I was off to a roaring start with this blog. There’s so much I want to say and even more I want to do. 2018 is to be my year of adventure, building on the experiences of the past 5 years. I want to backpack more, run more, kayak more, rock climb …

What followed has been so much doubt. I weigh too much, haven’t done enough, don’t have a dramatic enough back story to write about what I’m doing.

So here’s the takeaway after a few days of pity: never look at anything I do as bragging! Don’t look at me and think you can never live up to me! I have so many weaknesses and probably my biggest is self doubt. But I have proven to myself time and again that I can be in control and do more than I thought possible. Change really can happen — have I said that already?

So I can’t spend too much time feeling sorry for myself, and I instead have to put in the work. Right now that means consistent workouts and Sunday long runs to prepare for the Harpers Ferry Half Marathon in May 19. It isn’t very glamorous. I did get out for seven sunny miles this Sunday, but the rest of the week it’s treadmill time and some Beach Body strength workouts all from the basement, where I can hit pause to open a pack of fruit snacks or wipe a butt. Not much fodder for a nicely packaged social media post.

Over time I have been “following” the social media of more and more running/outdoor brands and figures. I LOVE seeing all the pictures of people skiing and climbing and of deserts and summits and winding trails through forests. I hope as my kids get older, I’ll get to explore it all.

It’s easy to see these beautiful images and feel like a failure, but the cool thing is, when I look back on my own accomplishments I see something that those types of posts can’t reveal: persistence. Day in and day out, I’m hustling wherever I can, bribing my almost-4-year-old to take a stroller ride or sneaking to the basement yet again to do s workout video. These small choices add up. It’s cliche, but brick by brick I am building a foundation that I’ll keep working on — indefinitely. At the end of the day I like to set goals, I like to get outside and I like to inspire my kids that they can do the same. That’s something we can all do.

I distinctly remember doing an assignment in 3rd or 4th grade about where I saw myself in 20 years. I would be an author, with a two-story house. I already knew I wanted to write. Years later I chose journalism for a couple reasons. One, I knew of a lot more newspaper people than novelists, and, two, I felt by choosing journalism what I was really doing was avoiding making a choice at all. It turned out I was pretty right. From college through my 7-8 years as a newspaper lady, I got glimpses at everything from surgeries to doll designing to pepper farming and town planning. When I became a mom, I also took a turn at writing a lifestyle column for a couple years. I was ready to have my own voice, and I liked that, too.

When our family was about to grow again, I made the important and necessary decision to leave newspapers behind. The past few years as my three sons have kept growing and my family’s interests in all kinds of adventures have too, I have felt the pull to write in my own voice once again. Not to offer advice, but to just share what we do. Maybe it’s more for me. Or maybe they’ll want to read it someday. Or maybe, I can hope, we can be an inspiration for other families, proof that it’s worth a shot to try something new as often as possible.

I might never have gotten the courage but for what has been a very fortunate turn of events in recent months. Looking at my planner for 2018, I knew it had to be a big year for us. In 2016 I did some of my biggest runs including my second attempt at a half marathon and the Army Ten-Miler. In 2017 I scaled back, focused on hiking and accomplished my first-ever backpacking trip with two girlfriends: 60ish miles on the Appalachian Trail over five days. I wanted more for 2018. More everything. Then I saw a Facebook post that a local running store, Two Rivers Treads, was looking for ambassadors. Those chosen, among other goodies, would receive free entry to the races they produce including one I have had my eye on: The Harpers Ferry Half Marathon. Without hesitating, I applied. Somehow, I was lucky enough to be chosen among other much more accomplished-looking athletes comprising the Two Rivers Treads Thunder Squad. Now there are no excuses. I have every reason to make this my best year ever. It has been such a motivator for me, and I’m so excited to promote their mission of health and being active. And it was the little push I needed to dive into something else I’ve been toying with for too long. And so, welcome to my blog.